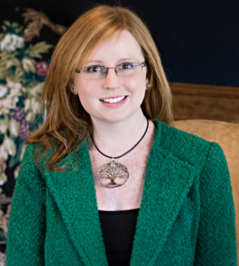 Kristin holds paid subscriptions to many online databases and has established a working network of fellow professional genealogists across the United States and abroad. She strives to uphold the guidelines and ethics of the genealogy community as set forth by the Association of Professional Genealogists (APG) and the National Genealogical Society (NGS).

Kristin Harms is the owner and princip​al genealogist of Relative Proof, LLC.

Rapids, Michigan and a winner of the 2017 AncestryProGenealogists

Director of the Institute of Genealogy and Historical Research (IGHR), the

Kristin has colonial roots in Pennsylvania, New York, Connecticut, Rhode Island, New Hampshire and Massachusetts––her immigrant ancestors came from Germany,Switzerland, England, Scotland, and Ireland. In addition to colonial research, Kristin specializes in research in the Southeastern United States, specifically Georgia. She lives just outside of Atlanta, Georgia, convenient to the Georgia Archives and the National Archives at Atlanta, NARA’s Southeastern Division. Kristin earned her B.A. in East Asian Studies and Economics from Denison University in Granville, Ohio, and also studied at Nanjing University in Nanjing, China. She has been chasing and analyzing the evidence of her own ancestors’ lives for more than 20 years.

Kristin and her husband have two children in college and several shelter dogs. For the past fifteen years Kristin has delivered the same Meals on Wheels route and is currently a sustaining member of National Charity League, Inc., Milton Chapter.